Along the southern coast of England, within the ruins of this old house, a few mangled pages from a journal were found.

From the Journal of Thadeus Belmont

As to the events that transpired between the dates of these journal entries, they are covered at length in a subsequent manuscript.

While in England, I was contacted by a doctor (who shall remain nameless for obvious reasons) at a psychiatric hospital for the mentally ill located just west of Tunbridge Wells. He was in possession of a manuscript given to him by a patient, and thought that it would be of interest to me. He of course would relinquish no details as to the patient’s personal information or current health, but assured me that the patient had no further use for the documents. After the doctor allowed me to read a small portion, I agreed to pay a hefty sum to acquire the papers. THE GODS LONG FORGOTTEN is the document that I received from the doctor and contains what seems to be Thadeus Belmont’s ultimate fate.

In San Francisco, I was told of strange rumors regarding the Bunel family. When I went to the address that I had found in the tax records, a relatively rundown tenement building, I was told that they had moved just a couple of months earlier. Upon discovering their new address, I found an extremely nice, 2,300 square foot home.

When I not so tactfully inquired about the change of scenery, I was told by Maria Bunel that it was the very least the bastards at the church could do after taking her son’s eye and leaving him to die.

Maria then broke down crying and asked me to leave. After several reassurances that I only wanted to help tell her story so that ‘they’ (and at this point I didn’t actually know who ‘they’ were) would not get away with this, Maria told me of her son, Carlos. Apparently he had recently committed suicide. The medical examiner determined that the boy had committed seppuku with a kitchen knife.

Maria, insisted that her son had not been trying to kill himself. She said that the entire time Carlos was cutting into his stomach, he was screaming, “Get it out! Get it out!”

A few months before, Maria had gone to her local parish for help because she was convinced that her son was possessed. After pleading and begging, an older priest, Father Davids, came to the house and saw the boy’s condition. He then called upon a colleague, Father Goodman, to assist in performing an exorcism.

The family does not know what occurred behind the closed door of their son’s room, but they claim that Father Goodman came out and subsequently abandoned their child to his fate.

In going to the local church, I found Father Davids, but he claims the entire event is a fiction created as a coping mechanism for the family. He denies any compensation to the family came from the church. He admits that he went to see the boy simply to calm the mind of the mother, but all he saw was a troubled boy that needed professional help and gave that advice to Maria.

He says that no exorcism was performed and that there is not, nor has there ever been, a Father Goodman at the church.

After speaking with several of the local residents, I discovered that there was in fact a Father Goodman, but that no one had seen him after September 14, 2013. He simply up and left town, leaving all of his belongings and work behind.

After considerable research and legwork, I tracked the man down to Carrizozo, a small town in New Mexico. Twenty miles outside of town, literally in the middle of nowhere, is a bar with no name. I have no idea how anyone finds it, or why anyone would drive that far for a drink.

Normally when walking into a vacant space, one can usually pick up on the residual atmosphere as to what kind of place it is when occupied. Is it jovial, busy, calm, depressing? Entering this desolate bar was like walking into a Cormac McCarthy novel. The studs in the walls strained under the weight of the sheer hopelessness that hung in the air.

Besides the bartender, there were only two other men present and sitting as far from one another as possible before one of them would have been seated in the parking lot.

The man to my left was staring at a muted tube television from the 1990s hanging on the wall and absently drinking his beer. The other man was staring intently into his beer and drinking it like a man reaching for a life preserver. I approached the more desperate man and learned that he was in fact Goodman. After I purchased enough drinks to drown a horse, the ex-priest talked; I don’t think it was willingly, it just poured out of him like vomit.

With the amount of beer in him, I don’t know how much of this is true, but this is the story as it was told to me.

My old theology professor passed away last week. He left no family behind. After attending his rather meager service, I let myself into his home to retrieve a ring about which he had once told me. Considering how he had originally obtained the ring, I did not think he would mind. 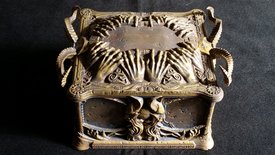 After rummaging through the dead man’s possessions, I found the ring in an unusual tarnished box. 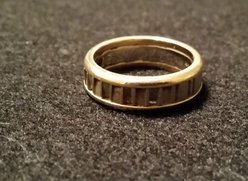 Inside the ring is an inscription: Vous Et Nul Autre
which translates to, ‘You And No Other’.
I don’t know if this is an endearment, a clue, or a warning.

My professor had believed that this was the Ring of Keys. The claim is that it can open something of great significance. However, I have not yet solved the mystery as to what that significant something is or how the ring will open it.

I will relay my professor’s tale at a future date. I need to speak with my attorney to ensure there can be no legal repercussions.

In Reedville, Virginia, I experienced something that shook my faith. Usually, people with religious beliefs will go through something traumatic that makes them question the existence of anything spiritual.

Previously, I believed in nothing spiritual. But what I saw that night upended the very core of my beliefs. I realized that it was impossible for there to just be nothing out there. There was no reasonable explanation, and since I was not alone in witnessing it, it was something more than fatigue and an overactive imagination.

I have the questions, and now I will search for the answers. I have already uncovered several artifacts and forgotten books which seem to allow the user to do the seemingly impossible.

If you have an object or an unexplainable story, contact me and we will find the truth.